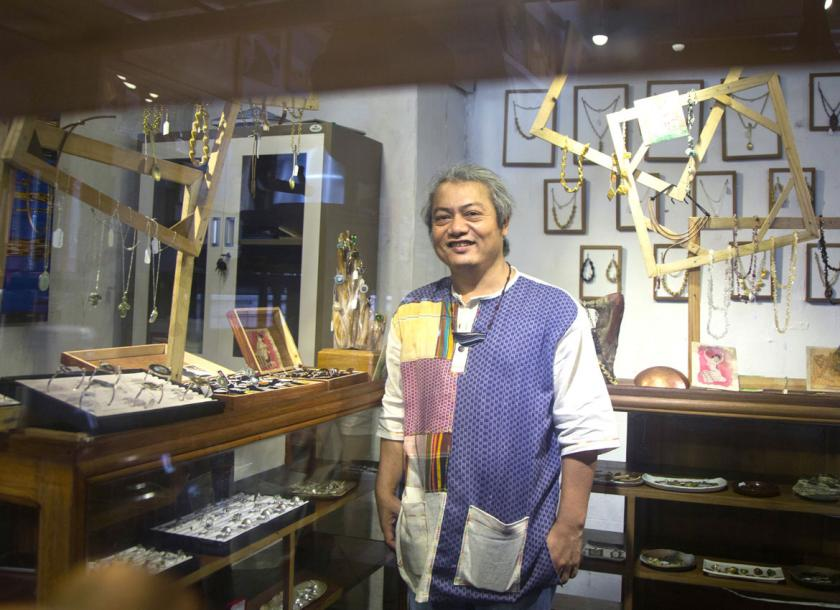 English Version of this article

Burmese version of this biography

Sein Bo Tint was regarded as a leading Burmese musician. He was renowned for his virtuosity in playing the hsaing-waing (also called pat-waing), a set of 21 drums arranged in a circle, for which this traditional Burmese ensemble of instruments is named, and also for his compositions and his innovations in Myanmar’s traditional music, despite the restrictions imposed on the Burmese cultural scene in the socialist period between 1962 and 1988. He can be regarded as a musician who linked the traditional Burmese music of royal times with “modern” elements and as an artist integrating different segments of Myanmar society. He was also one of the three favourite musicians of Ne Win.

He was born in 1938 as Maung Tint, the fifth of ten children in Kyaik-lat, a town in the Ayeyawadi Division some 120 km southwest of Yangon. His father was a hsaing-waing (drum circle) player. At the age of seven, the family moved to a western Yangon township where he lived until the end of his life. As a young boy, he learned – in addition to his father’s instrument – to play patala (a bamboo xylophon), mandolin, flute and hne, a reed instrument. His talent was noticed early. Shortly after having moved to Rangoon, when playing at the Shwedagon Pagoda, he attracted the attention of the national hero and general (Burmese bo-gyoke) Aung San. For that reason, the word “Bo” (commander) was later prefixed to his name. The third part of his name – Sein – was added later, after he had become famous as a hsaing saya, a master of the instrument, like many other Burmese orchestra musicians who had been named “Sein”.

He left school after finishing grade seven at the age of 14; after that he became a full-time musician. It is reported that he composed his first song at the age of 16 or 17, showing his talent to write song texts. Sein Bo Tint was the student of a number of renowned musicians who had been students of musicians who had played at the last royal court in Mandalay. He became famous nationwide after his performances were broadcast via radio and TV, and he was active in a number of state organisations aiming to preserve the traditions of court music. Furthermore, he was member of the board of the Cultural University, engaged in reviving music and dance competitions and promoting the exchange of musicians from different ethnic groups. From time to time he was invited by the country’s Number One, Ne Win, to perform at meetings in his home on Ady Road.

He had to support a large family with his performances – reportedly he had eight children, among them only one who stepped into his shoes by becoming a musician. He was a chain smoker and died in 1994 from lung cancer.

During royal times, until the end of the Burmese monarchy in 1885, a canon of songs called maha-gita (great music) was established, performed by a variety of ensembles and singers. After the British conquest of Burma in 1885, the traditional canon lost its importance due to the abolishment of the royal court and its dominating influence on the country’s culture. New types of songs arose, influenced by the attempts of the British administration and missionaries to adapt Burma to modern times. Of the music ensembles only the orchestras around the hsaing-waing survived. However, one crucial characteristic element of Burmese music did not fundamentally change: the close teacher-student relationship. Students repeated what their teachers played, but at the same time were encouraged to find their own style by inventing ornaments and other variations added to the basic tunes.

Sein Bo Tint received his basic education at a time of great cultural variety after independence during the premiership of U Nu, who had wanted to become a playwright in his early days. U Nu was called thabin-wun – “theatre minister” – because of his affinity with the fine arts. This period, in which musical elements from abroad like swing and other jazz genres became popular, influenced the young musician and contributed to his ability in combining the tradition rooted in royal times and adapted elements coming from abroad, for which he became famous.

When the military took over power after the coup of March 1962, Sein Bo Tint was able to cope with the new situation of Burma’s isolationist policies that also affected culture. Culture was regulated and the old traditions originating in royal times were revived at the expense of foreign influences. Sein Bo Tint adapted to these conditions and contributed to the new ideal of unity under Burmese domination by creating a song in which rhythmic elements of the main ethnic groups of Burma varied the tune invented by the musician. Here the official ideal of ethnic harmony and integration under a dominating force was musically represented. However, this political ideal never matched the political realities.

On the other hand, Sein Bo Tint introduced a number of innovations to traditional Burmese music and the instruments on which it is performed. He introduced a new order and an enlargement of the hsaing-waing ensemble – sometimes up to seven hne-players were included – in addition to a new design of the whole ensemble, positioned within a great carved frame on a variety of levels. The name of the orchestra alluded to a king of old times who used to play the harp so beautifully that even elephants peacefully came to him to listen to the music. Carved elephant figures served as a visual illustration of this historical reminiscence. On the other hand, the artist from time to time gave solo performances.

Another innovation was the invention of chromatic instruments that could help to bridge the gap between Burmese and western tonalities. The kyi waing was extended to 29 gongs. One of his pupils was trained to tune the gongs with the assistance of 12 European fifes. Later electronic tuners were used. This innovation contributed to a broadening of the repertoire of the music groups and their ability to play with western musicians while not giving up their traditional acoustic colour. He finally invented a simple bass instrument, not known before in Burma, just one string placed using a washtub as resonator, that is known as a “washtub bass” in American folk music.

Sein Bo Tint thus balanced traditional music with introducing new and even “western” elements that were otherwise shunned by the socialist government’s cultural policies, which emphasised the preservation of traditional arts by way of simply “freezing them”. The fact that Ne Win liked his music, and might have used its public fame to make the socialist system gain some popularity, was helpful to preserve this balance.

Sein Po Tint was a musical practitioner, not a theorist who talked or wrote about what the music he performed was about. He communicated through his music and through his students who carried on what they had learned from him. He himself had carried on by balancing what he had been taught and inventing something new throughout the succession of his teachers. He might be called a “traditional reformer” who excelled because of his special talents.

With regard to the cultural-political context of his life and work, one may say that he helped to bridge the 26 years of Burmese socialist isolation between the Nu-era and the opening of the country after 1988 when – somewhat ironically – western countries did not fully use the opportunities offered by the military junta for opening the country to foreign influences. In a way, it was Sein Bo Tint’s students who benefited from his innovations, both inside the country and in the exchange with foreign musicians.

Inside Myanmar, the economic and cultural opening up of the country was used by some of his students to become successful “band leaders” of hsaing-waing ensembles, producing CDs that sold well and received prestigious awards. These students concentrated on using one of his innovations and developed it further.

Other students used the adaption of the western musical traditions and techniques. This way the door was opened to playing together with jazz musicians at festivals in Europe as well as in Myanmar. As adults, his students had developed an affinity with western musical culture without abandoning the traditional concepts of Burmese music. Such blending of different musical traditions was well-received by various audiences and very much enjoyed by the musicians on both sides. This developed into a series of meetings of the two sides under the heading “Myanmar meets Europe”.1

It was Sein Bo Tint’s – as well as some other musicians’ – popularity during the Ne Win era that paved the way for such new encounters between different musical cultures. He did not fight the conservatism of the Burmese cultural bureaucracy in the socialist period, but used free space to introduce new ways that he found worthwhile after his experiences under U Nu. He and his students further benefited from the traditional personal way of passing on knowledge in Burmese society. He was an individualist like his students and therefore not interested in founding any kind of “movement” that could be regarded as a threat to the state. However, it remains to be seen how the music of his students will cope with the trends in Myanmar to copy western pop culture, which had been strictly prohibited during the socialist period.

No literature on Sein Bo Tint is available in a western language. The biography is based on the research of the author in Myanmar.

The biography was edited by Hans-Bernd Zöllner