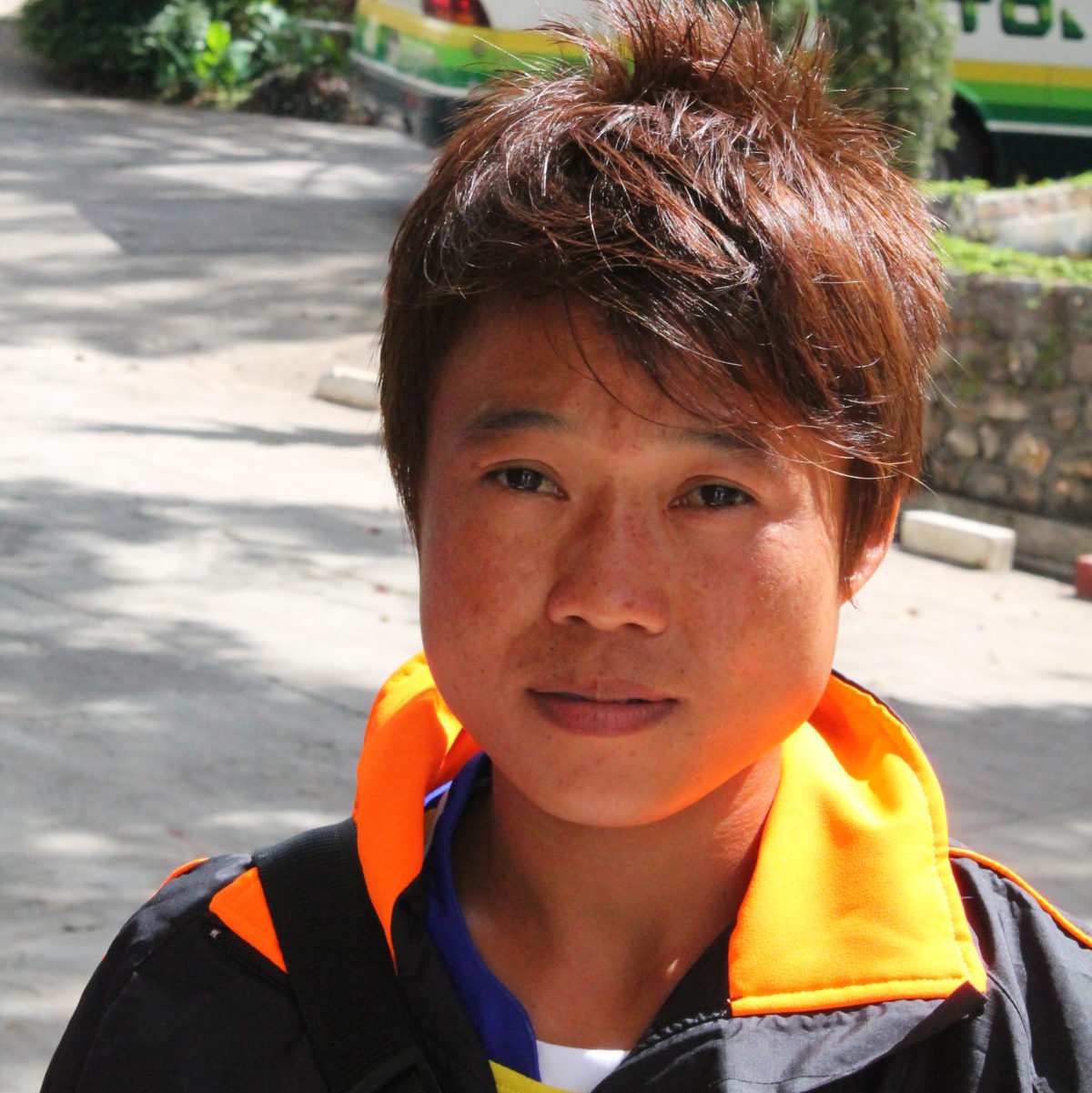 Naw Ah Loh Wah Paw is on the national Myanmar women football team since 2007. She is the only Christian in the team, coming from the Kayah state. When moving from the strongly Christian village background to the national Training Centre for Myanmar in Yangon, she underwent a big personal change. She moved from her village to urban life. Her ethnic identity as a Kayah was confronted with the foreign dominant culture of a national majority, and with the plurality of cultures and religions, and with her own role as a football striker on the national level. Her biography shows the opening up towards trust in people who are different, by means of her role as team in the national team. The biography sheds some light on the role of sports in Myanmar.

Ah Loh Wah Paw was born on August 1, 1988 in the Demawhsoe Township of Kayah state, to her parents Saw Moody and Naw Yuti and their eight children. In her village she is brought up as a Christian child. At the age of 15 she moves to the big city of Yangon for physical education, and four years later she is made a Myanmar selected women football player.

When she was a child she had already been selected as a volleyball player of her school. Her teachers were impressed with her volleyball skills so they sent her on her career to education on the national level, with a government scholarship. Then she undergoes a heavy training schedule. In 2011, they are being trained by a Japanese coach. Her national team is now qualified for many Asian regional contests.

When moving onto the national level she follows one conviction: “to do her best for her country”. Every aspect of daily life is subordinate to this aim. When doing her physical training she used to get discouraged because she is the only Christian, and there is some discrimination against her because of her religion. But, as she says, by the grace of God, she gets a chance to go to church on Sunday. So she looked for a Baptist Church in Yangon which suited her local upbringing.

On the one hand she learns how to cope with this new pluralistic life within the framework of her religious tradition. Although she has to live among non-Christians, she never forgets God. She manages to overcome all difficulties she is facing with the courage and strength given by God. So in the end she no longer has problems in dealing with non-Christians, because since the time of her baptism, she has learned how to forgive. In this way, she says, she can proclaim the love of God.

On the other hand she makes the new experience of a team spirit in the national football team. They learn together on the pitch. Her experience is the unity and harmony among the players. Now she knows how to live peacefully and amicably with other people. There is mutual respect and mutual understanding between her and her non–Christian friends. They help each other when one is in need. She learns her lesson: Her friends are also loving, compassionate and helpful although they are not Christians.

Ah Lo Wah Paw is exposed to a world very different from her childhood in a Kayah village. Her biography is a model for developing an approach to a multi-ethnic and multi-religious state. The isolation of a closely knit community, and culture, is being opened up in an individual life span of a girl. As a young adult she can say: I am proud to serve my nation, on the football pitch. All this happens within the framework of military rule at that time.

The training makes a very remarkable contribution to her national identity. She learns the conviction that she is working not only for herself but also for her people and her country. When reflecting upon her career she realizes: She was born and bred in a small village in Kayah state, but she has managed to bring glory to her country Myanmar. She says: It is really praiseworthy. By scoring the only goal against the Laos team in 2011, Ah Lo Wah Paw helped the Myanmar team to to finish the ASEAN Football Federation’schampionship in 2011 as runner-up.

But at the same time she is loyal to her ethnic identity. She says: I will never forget Kayah State and Kayah people that I love very much. She is determined to help Kayah young people become good sports men and women, when she will have to retire from sports in the years to come.

This biography shows an impressive personal development within few years of one’s life. As a European, one can feel distanced by the black and white perception – there are either Christians, or there are non-Christians, there is the minority of the Kayah people, and there is the large country of Myanmar, member of the ASEAN. But at the same time one can feel the miracle of the British team spirit on the playground: the team spirit opens up the black and white world view. It is now possible to live in peace and friendship with people who are very different from me, even though they are Buddhists and Burmese, not Christian and Kayah. This is very moving.

This text is based on the short biography written by Thuzar Thein for a collection of life stories of Burmese Protestant Christians, see http://www.emw-d.de/fix/files/37%20biographies_myanmar.pdf.