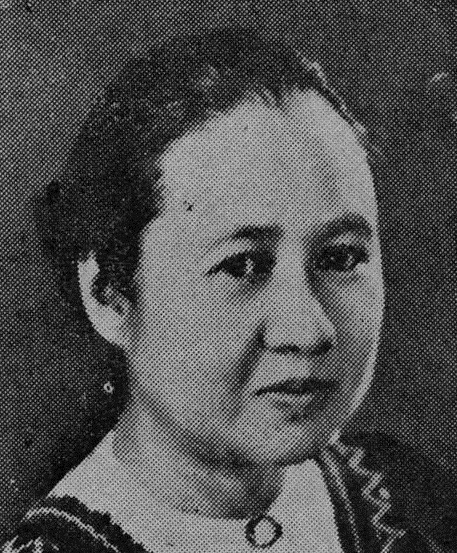 Claribel Ba Maung Chain (called Irene Po as well) was the daughter of the Kayin physician and politician San C. Po who in a book published in 1928 had advocated a separate administrations for Burmans and Karens. [http://gutenberg.net.au/ebooks08/0800051h.html) After independence, she held a political office for a short time as a minister in one of U Nu’s cabinet. She was the first and only female cabinet member until 2012 after a formally civil government under ex-general Thein Sein had taken over the government from the previous military junta.[1] Her main interest, however, was to promote education and social services. Being a Christian, she used the organisation of the Young Women Christian Association (YWCA) to accomplish these objectives and to represent Burma internationally. She is a representative of the Anglophile Christian Karen elite of the country and the attempts of members of this elite to hold the country together.

Claribel Ba Maung Chain was born on 1 June 1905 in Pathein. Both her parents were members of the Kayin elite and had studied in the United States and England respectively. Her mother was the daughter of a co-founder of the Karen National Association that in 1884 became the first native political organisation in Burma. Like her father, she wanted to studied medicine, but was not able to do so because of poor health. After studying English literature at Rangoon University and the Judson college, she worked as a teacher in her home town from 1928 until her marriage in 1935 to an engineer who had studied in England. The couple moved to Rangoon. She gave birth to two daughters. Both of them studied medicine.
After the war and the beginning of the civil war, she was part of a delegation of the government trying to negotiate a peace settlement with the Karen National Union (KNU). In 1951, she was part of a committee working on a bill to create a separate Karen State within the Union of Burma. Before the elections held in 1951/52, she joined one of the Kayin parties, the Union Karen League that had decided to join the AFPFL and was elected as a member of parliament in Hanthawaddy District. After a Ministry for Karen Affairs was established in 1952, she became the first head of the new ministry and was sworn in on March 18, 1952. One of her main initiatives was to persuade young rebel soldiers to stop fighting the government and start a civilian career. She resigned from her post on March 4, 1953 after having participated in a parliamentary delegation to Britain in 1952. Later, she was offered the post of ambassador to England but declined, allegedly because of objection of her husband.
Already in 1951, she had become the first native President of the YWCA and a member of the Executive Committee of the world’s YWCA. In the following years, she became the association’s Vice President for Asia and was responsible for one of the “Y#s” committees. She was re-elected in 1959. She travelled widely and represented her country at various conferences and church meetings around the world. Her last reported participation in such a meeting took place in 1961 at a conference of the World Council of Churches in New Delhi. In the same year, she became president of the Burma Council of Churches.
Nothing is known about her last years. She died on February 24, 1994.

Claribel Ba Maung Chain has not written any book and none of her many speeches that she must have delivered has been recorded. It is however quite clear from her biography that she was dedicated to serve the “social gospel” emphasising the practical dimension of the Christian faith. She was thus rooted in the tradition of what many Karen women were renowned for serving others in the field of education and medicine. In this way, she was a “minister”, a servant in the literal sense of the word, but never a politician. “Politics is a dirty job – but can be made clean” she is reported to have said. She tried to perform “clean politics” during her short time as a politician, a task she had taken over because she had been asked by members of the Karen community and Premier Nu.
In an interview given to an American journalist in 1952 after her appointment as minister, she explained about pragmatic attitudes towards those parts of the Karen community fighting the government. “One hope we have is that the Karen parents are getting tired of their children missing education just as they did under the Japs [Japanese]. They want peace, we think.” She further went to the edges of the regions held by the rebels and talked to some leaders and helped to severe ties between the rebels and British supporters that had been established during the fight against the Japanese.3 Ain a newspaper report, she she was quoted thus: “Since we have rooted out a certain Seven Day Adventist missionary, a London newspaperman and a British major who kept a rebel headquarters at Calcutta, we feel that the British are staying out of the Karen troubles.”4 Accordings to the same article, she added that she was worried about a possible communist influence on Kayin leadership.
Another anecdote shows that she was not just critical to direct foreign interference in Burmese affairs but to other impacts of the West as well. She told another journalist about a conversation with a young Karen rebel fighter shortly before her resignation whom she had asked: “Why must you carry on this senseless fight? What is the future of us Karens if young men like you never go to school, never learn anything how to use a gun?” The answer: “You don’t need education to be successful. Look at Henry Ford.”5
Claribel Ba Maung Chain was in no way an “ethno-nationalist” but somebody who – differently from her father – believed in the cooperation between the Burmese and Kayin people to establish an independent nation of Burma. Furthermore, she sregarded education as a key to make the Burma a peaceful place.
One might suspect that her experiences as an “amateur” politician trying to help solving political problems at the grassroots level were frustrating and she thought it more rewarding to use her talents to help the people of her country as a community worker and somebody establishing ties between Burma and the world. Her “second love” as she called the YWCA – second after her husband – provided this opportunity.

Claribel Ba Maung Chain is one of the many Burmese persons about whom we know too little to assess their contribution to the society of her country in an adequate way. She grew up in a multicultural Karen-Christian-Anglicised context strongly influence by the missionaries’ emphasis on medical care and education.
Her to speak many languages and thus be qualified to mediate between different cultures. She possessed all these qualities and was therefore chosen to represent the people of Burma in a variety of national and international contexts.
Her function as the first and for a very long time the only female minister of Burma is almost stereotypically repeated both by western and Burmese media. Such highlighting stresses the lack of representation of women in Burmese politics and tends to downplay her achievements as an “ordinary citizen” of Burma. Such way of looking at things concentrates on the quantity of women known as political and societal leaders and neglects the quality of women’s contributions to uplift the welfare of the people. As a consequence, Claribel Ba Maung Chain might be regarded as a representative of the many Burmese women who worked in certain sectors of Burmese society in order to maintain the social balance despite the many catastrophes happening in Burma/Myanmar in recent history. She was a very responsible person but at the same time a very independent one. She followed her father in getting engaged in the political affairs of the country but quit office after she had realised that she could serve the people better in other ways. She was educated as a member of a Christian-Karen elite, but was highly critical of any attempt top play off the different ethnic groups in Burma against each other.
On this background, Claribel Ba Maung Chain’s life might be seen as an indication that the course of Myanmar history would have been different if the pragmatic approach taken by her and many other women to serve their country would prevail. The few quotations recorded from her demonstrate that she was an intelligent and witty speaker whose assessments were based on a down-to earth analysis of the situation. She was thus a good ambassador for her country as well of the Kayin community she represented without carrying an official title. She did a lot of networking as well as inspiring other women to follow her footsteps. One of her granddaughters is stepping into her shoes by working as an YWCA executive.

This text is based on the short biography written by Saw Nathanayla for a collection of  life stories of Burmese Protestant Christians.6 Besides a number of internet sources, the following publications were consulted as well:
Tinker, Hugh 1957 The Union of Burma. A Study of the First Years of Independence. Oxford, Oxford University Press.
Who’s Who in Burma 1961 Rangoon, People‘s Literature Committee and House.

[1] Myat Myat Ohn Khin was appointed as Minister for Social Welfare in September 2012.